Sometimes it is difficult to hold the attention of a group of preschoolers.  However, this activity kept them exploring for forty-five minutes!  This week we explored color mixing!

An important part of early science is teaching what different tools scientists use and how to use them. We were going to use eyedroppers for our activity, so I made sure to explicitly teach how to use an eyedropper and gave the kids time to explore their new tool. By the end, they were so impressed by how much water they would get into their eyedroppers!

Next, I split the group into pairs and gave each pair three cups of water, one blue, one yellow, and one red. I also gave them clear smaller cups with clear water in it. Then, I basically let them “go to town”! They had such a blast! 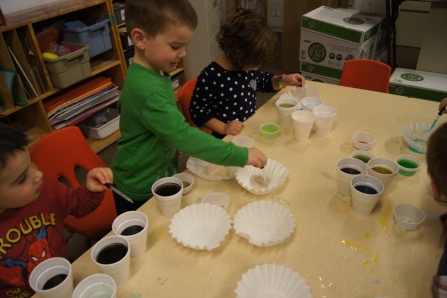 Mostly, they would start by mixing two different colors. I would ask them what colors they used to make green, for example. I kept trying to get them to remember the “recipe” for each color. Eventually, after adding more and more colors, the cups turned into a black or brown color. At this time, I would quickly switch it with a clear one and they would start again.  They liked seeing the different colors that their friends were making and asking them how to do it and then trying to do it themselves.

I loved when this little girl asked..”I wonder if it will turn purple if I try adding the red first this time?” So, we experimented. She filled one cup with the blue first and one with the red first and then added the opposite color and they both turned purple! Excellent learning opportunity!

This was fun too. This little girl realized with a little control with her eyedropper, she could put two colors in it at one time! I have to say that this was a pretty impressive discovery! 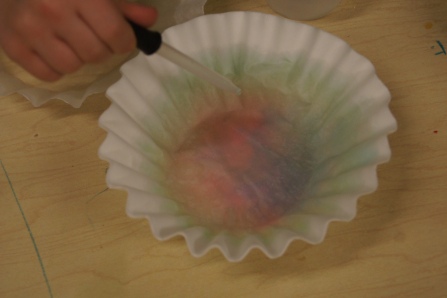 We talked a bit about capillary action using coffee filters. The coffee filter sucked up the liquid from the eyedroppers. The children were able to color mix on their coffee filters. We also used celery that was left overnight in their classrooms (but I didn’t get a picture of it.) 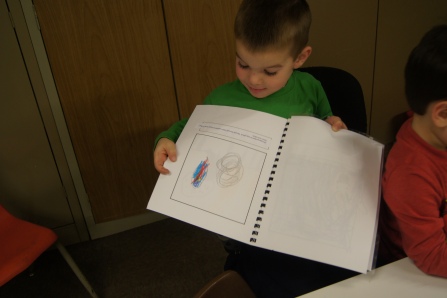 Something about this lesson really clicked with the kids. It could have been because it was so hands-on and individual. Each child wrote accurate reflections in their journals. I basically have the kids “write” whatever they want in their journals. I try to encourage them to write about what they learned or experienced. However, there are usually a couple of children that would rather write about other topics. Therefore, it was very impressive that every child wrote about the color mixing. Some of them wrote different “recipes” that they learned and other drew the eyedroppers.

This week, we really had a great class.  I didn’t want it to end and I hope that the kids felt the same way!  We had so much fun!  I can’t wait until next week!