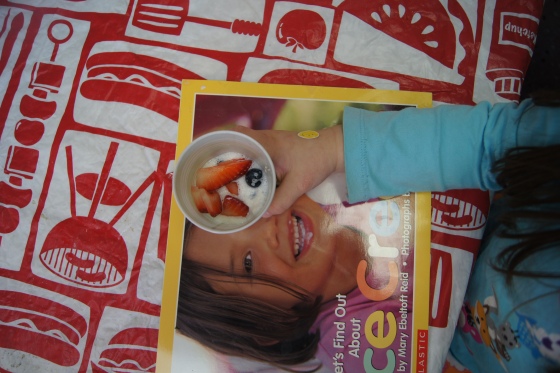 Although it was FREEZING outside, we decided to create our own ice cream!

END_OF_DOCUMENT_TOKEN_TO_BE_REPLACED

Today, we created our own “puffy paint.”  It was a great lesson on states of matter and change.  The kids had a ball with this one……

END_OF_DOCUMENT_TOKEN_TO_BE_REPLACED

Locally, we have had lots and lots and LOTS of snow lately.  We definitely have snow on the brains!  Due to extremely cold temperatures, we decided to create snow indoors.  Here is what we did….

END_OF_DOCUMENT_TOKEN_TO_BE_REPLACED

With all of the freezing weather that we have had lately, I thought it was time to discuss water in its solid state-ice!  We began by discussing the difference between water in it’s liquid state and in its solid state.  The night before, I filled one paper cup, per child, with water and stuck it in the freezer.

I passed out the cups to each child and we made observations using our senses. We talked about how solid it was, how cold it felt, and how parts of the ice chunk were turning into water.

We talked about how slippery ice is and what could happen if you were to step on ice.  Next, we talked about how important it is to melt ice so people and cars may get to their destinations safely.  But how??  How can we melt ice when it is cold outside?  This was our question for the day…

I gave each child a container to put their ice chunk in so the mess could be easier to clean at the end. I also gave each child a per of gloves, an eyedropper (because it is more fun when color is added!), a cup of salt, and cups of colored water.

The kids got right to work! They watched as their ice was quickly melted by the salt.

You can’t really tell in the pictures, but the combination of salt and colored water made these river-looking panels down the sides of the ice. The kids had a blast sending different colors down the rivers. 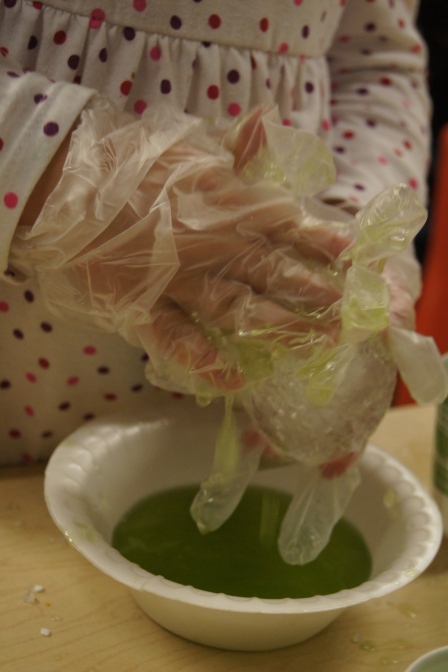 The scientists were determined to melt their entire ice chunk!

It can be difficult to hold the attention span of preschoolers on one topic for forty-five minutes.  However, this activity did!!!  I actually had to stop the scientists so we would have time to record their observations in their journals.  I highly recommend doing this experiment.  I was thinking that next time, I may put something in the ice that the kids need to get to, such as a plastic toy.